Abuse of A Vulnerable Adult

Here is an email I sent to Mr. Andy Mao who is the head of  the Department of Justice Coordinator Elder Justice Initiative  on June 23, 2016. 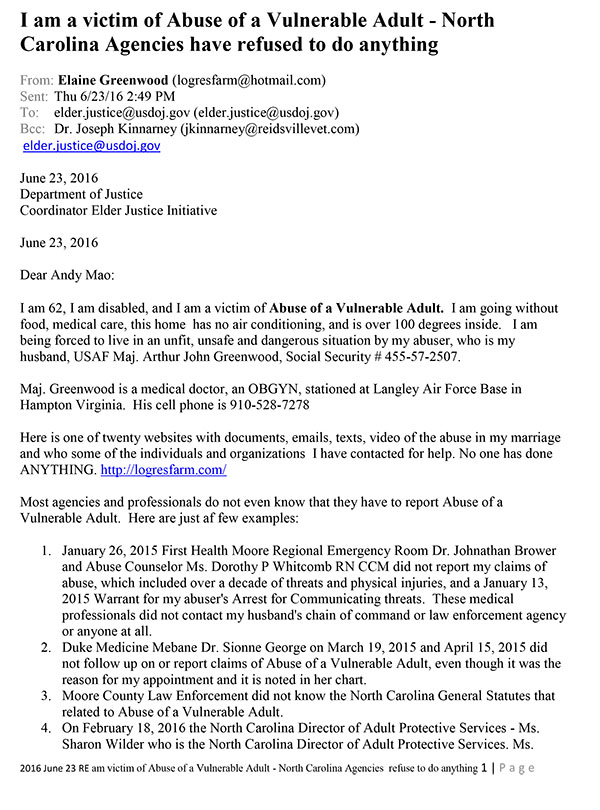 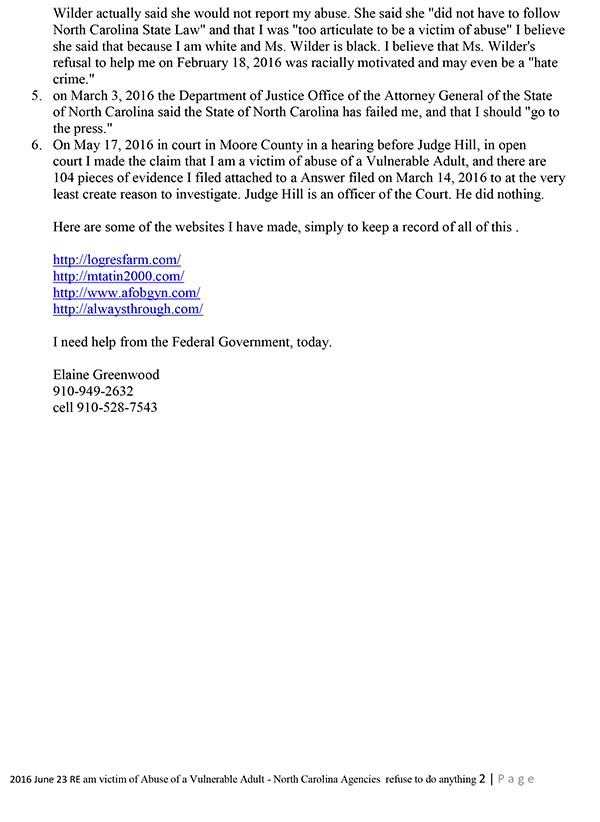 Here are emails I sent to Congressional Representatives

Apparently no one in Congress has bothered to fund programs that help victims of Abuse of a Vulnerable Adult, which impacts the fastest growing segment of our society. Government reports have indicated for years now that Abuse of A Vulnerable Adult is growing. It will very likely impact you or someone you love.

I am 62  years old. I am disabled. My husband controls 100% of our finances. I have no access to credit, to savings, to anything at all, except what he decides to deposit in our joint bank Account. Currently there is less than fifty dollars in the account, which is not remotely enough to meet any minimal standards for food, rent, insurance, taxes,  medical care, dental care,  or any of the debts and obligations he has dumped on me. My husband is an extremely arrogant manipulative man. On August 6, 2015 I was told I was to “cut back on my standard of living.” You can see videos of home I am living in here: Page with VIDEOS from February 2, 2015 showing the conditions of this home

Things have gotten worse since February 2, 2015, in large part because I have been injured many many times since those videos were taken.  In July of 2015 Arthur took $5,675.00 from my bank account without my knowledge or consent. That money was to be used to pay a licensed electrical company to do what was possible to provide safe temporary electoral service for me and the horses.  As a result of Arthur taking the money from my account, I went without air conditioning in 100 degree heat, and slept in my van much of the summer.  Here is a video of how I have to bathe. VIDEO Conditions of home Oct 23, 2015 showing  how I have to bathe.  VIDEO made 2015 June 27 rain inside  and   VIDEO Thursday August 20, 2015  made about a week after Arthur stopped providing any support at all for the animals and ordered me to cut back on my standard of living.

In November of 2015 I learned that Arthur has the resources to hire civilian attorneys to harass me, and to provide for his obligations here. He is simply refusing to do so.

The USAF has known of my husbands conduct for years, and done nothing at all to help me.  As but one example of many,  here are days of email exchanges with my husband’s commander, USAF Medical Officer Col. Louis Martinez from January 5, 2015 to January 16, 2015, wherein Col Martinez is informed repeatedly that Arthur is NOT meeting his obligations to me or his animals.  Col Martinez did absolutely nothing as the animals and I ran completely out of food. Here are email exchanges with USAF Lt. Col Elliot Pinero in January of 2015 and in February of 2015.  There are hundreds more emails, texts and phone calls (some of which are recorded).

As I write this on January 1, 2016, were it not for the compassion and generosity of  a woman who has followed this on FaceBook, the  horses and dogs would have been without food for a month now.

And before you ask, “NO, I never willingly agreed to live like this, not for one day, not for one moment.”  Forcing me to live like this has always been abuse, especially when he was living in a second home in relatively luxury, with what I now know was a robust active social life,  that entirely excluded me. For much of our marriage he was obese while  I was starving.  While I lived in emotional and social isolation, in poverty, and went without food, heat, medical and dental care for years, Arthur  had a new bedroom suite, leather couch, huge screen T.V. with the deluxe cable sports package and went to parties, sports games and on trips that I never knew about.  In fact, he lied about our taxes, his income, his fidelity and just about every thing else. Over the years  I borrowed almost $400,000.00 (four hundred thousand dollars) so that Arthur could pursue his obsessions to be a horse and dog breeder.  It was a business that he deducted as a loss on his Federal Income Tax Return every year going back to 2004.  In the marriage I became nothing more than abused barn and kennel help.  Over the years there were many times that Arthur and I discussed how I was living versus how he was living and the money we were spending on his whims and obsessions, and always he promised that if I just held out a bit longer,  or let him spend our money on himself just one more time, that he would provide a real home for me and us.    If I just waited for one more thing he wanted first, if I just put off my needs for his impulsive whims.  In the end, in this marriage I was never more than his kennel and barn help.  As just one of dozens of examples, see video of home he wanted to buy in January of 2014

A Response to the Abuse of Vulnerable Adults