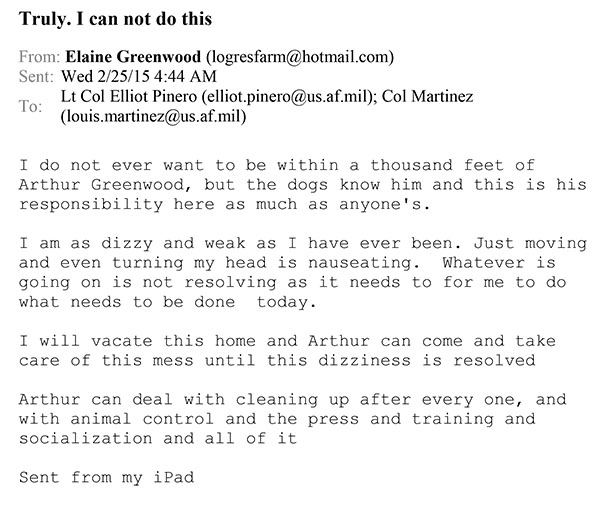 I was in the First Health Moore Regional Emergency Room yet again on April 25, 2015, because the stallion has slammed me into the gate post.

Here are videos of the stallion and the situation, simply to give you an idea of the size and power of these beautiful animals, who weigh roughly 1,000 lbs.

I would love for Dr. Tucich to try to lead the stallion through one of the gates, so that Dr. Tucich can experience getting “bumped” by the horse for himself, and then I’d like to see how Dr. Tucich would describe what he is feeling, that is, after he came out of the coma.

I am curious to see if Dr. Tucich would describe the huge responsibility I have for the horses and dogs Arthur Greenwood abandoned here as “playing with my pets.”

And I’m curious if Dr. Tucich would able to react one step ahead of a 1000 lbs. of horse, who might suddenly decide to take a step sideways for no apparent reason.

Dr. Tucich’s arrogance and dismissiveness is a reflection of his sheer ignorance. In all, Dr. Tucich never treated me with the simple dignity one would treat even an animal.

Dr. Tucich completely ignored what I said and refused to even consider that the pain in my chest had been caused by the stallion.

Instead, Tucich ignored me and belittled what I was saying about what had happened with the stallion, and insisted that I was about to have “a fatal cardiac event” entirely because of the previous sloppy inaccurate ER notes. Tucich flat out said that this was the third time I’d been to the Emergency Room for cardiac pain.

And the EGK, blood work and chest x-ray on April 11, 2015 did exactly that, i.e,, ruled out a heart attack. So did the subsequent ER visit. Yet I was being told I was a risk for an imminent fatal cardiac event.

Tucich insisted that I allow myself to be admitted to the hospital for what would have been tens of thousands of dollars in completely unnecessary medical tests, which my insurance would not have paid for entirely, in order to rule out a cardiac condition that Tucich would have known I did not have, if Tucich had simply bothered to examine me. See comments of Bashore on May 26, 2015.

are all at risk and are at an extreme disadvantage, because medical professionals:

When medical professionals rely upon their ignorance, stereotypes and prejudices, and then jump to erroneous conclusions, and then make stupid assumptions, their mistakes and lack of professionalism can be fatal.

The pain and other harm these arrogant unprofessional medical professionals do, because of their flawed judgments, bias, ageism, sexism, stereotypes and /or ignorant prejudices can be fatal.

This form of medical negligence and malpractice is entirely preventable.

Medical professionals and policy makers should be aware and respond to issues raised here with changes in policy.